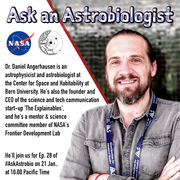 Our next episode of Ask an Astrobiologist is going to be on the 21st of January at 10:00 Pacific Time (17:00 UTC). You can tune in right here on SAGANet or watch on the NASA Astrobiology Facebook page. You can ask questions in the chat or use #AskAstrobio on Twitter to ask questions and engage with other audience members.

Our guest for this episode is Dr. Daniel Angerhausen! Dr. Angerhausen is an astrophysicist and astrobiologist at the Center for Space and Habitability at Bern University. A former NASA postdoctoral fellow, he is also founder and CEO of the science and tech communication start-up 'The Explainables'. On his search for planets around other stars, Daniel has flewn five missions on the NASA airborne telescope SOFIA. Daniel is also mentor and science committee member of NASA Frontier Development Lab, an Artificial Intelligence/Machine Learning incubator tackling challenges in various fields of space sciences in collaboration with industry stakeholders such as Google Cloud, Nvidia or IBM. Daniel also plays Sepaktakraw, an artistic footvolleyball game and competed several times at World Championships in South East Asia.

You can learn more about the show and watch past episodes here: https://astrobiology.nasa.gov/ask-an-astrobiologist/

RSVP for Ask an Astrobiologist with Dr. Daniel Angerhausen to add comments!