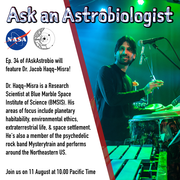 Our next episode of Ask an Astrobiologist is going to be next Tuesday, on the 11th of August at 10:00 Pacific Time (17:00 UTC). You can tune in on SAGANet or watch on the NASA Astrobiology Facebook page. You can ask questions in the chat or use #AskAstrobio on Twitter to ask questions and engage with other audience members.

Our guest for this episode is Dr. Jacob Haqq-Misra. Jacob is a research scientist at Blue Marble Space Institute of Science. His areas of focus include planetary habitability, atmospheric dynamics, environmental ethics, extraterrestrial life, and space settlement. He completed his Ph.D. in meteorology and astrobiology (2010) and his M.S. in meteorology (2007) from Penn State University. He also holds B.S. degrees in astrophysics and computer science from the University of Minnesota (2005). He works from his home office in Kent County, Delaware.

Jacob is a member of the American Geophysical Union and the International Astronomical Union. He serves on the METI International advisory council and the IAA SETI Permanent Committee. He also participates in public outreach events and is periodically interviewed for science news, radio, and television. Dr. Haqq-Misra also enjoys playing music as a drummer and vibraphonist and is a member of the psychedelic rock band Mysterytrain, performing around the Northeastern US. You can learn more about him at his website: https://haqqmisra.net/

Learn more about the #AskAstrobio show and watch past episodes here: https://astrobiology.nasa.gov/ask-an-astrobiologist/

RSVP for Ask an Astrobiologist with Dr. Jacob Haqq-Misra to add comments!

Great! I shared the event on my page, too - expect some pre-teens who will come to shower you with questions!