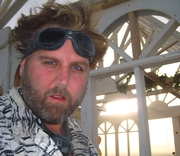 When: Wednesday, September 23rd 6pm Pacific, 7pm Mountain, 9pm Eastern (1:00:00 a.m. Thursday September 24 GMT)
Title: Join us for a special presentation and discussion on Language and Perception
Info: How does language shape the way with think and how we live? What if you didn't have a word for right and left but instead relied on cardinal direction? What if you had no unique words for colors or numbers? This is the case for some indigenous tribes. How does our language influence our relationships with one another and with ecology? How is language being manipulated by politicians, think tanks and corporations? Jason Bosch of ArgusFest will be presenting documentary clips along with excerpts from talks by linguists exploring questions of language and perception.
Jason's Bio: Jason Bosch is a filmmaker and activist from Denver, Colorado. In 2001 he founded ArgusFest, which works to raise awareness of human rights, social justice, media, and environmental issues. He has organized hundreds of events facilitating discussion; including documentary film screenings, lectures, art exhibits, and music concerts. He served on the board of the Denver VOICE, a homeless street paper from 2004 to 2012. In 2011 Jason was the campaign manager for Cheri Honkala, the Green Party candidate who ran for Sheriff of Philadelphia on a zero-evictions platform. Bosch is currently working on monetary and economic issues and is currently working on a documentary film about the influence of money on nonprofits and NGO's.