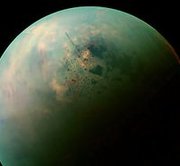 Life, Jim, but Not as We Know It: Prospects for Life in Titan's Hydrocarbon Seas

The prerequisites for life are thought to be: (1) a liquid solvent; (2) chemical building blocks; and (3) an energy source. Life like we have on the Earth uses water for its solvent and organic molecules for its building blocks. Hence searches for Earth-like life can focus on habitable zones around stars where liquid water can be stable on planetary surfaces. But is water the only solvent in which life can exist?

Though more exotic solvents (like ammonia, liquid nitrogen, or supercritical carbon dioxide) may exist in extrasolar systems, the only surface liquids outside of Earth that we know about today occur on Saturn’s smoggy moon Titan. I will describe these seas, their chemistry, and hydrology, with an eye toward whether they could serve as possible abodes for life. Recent Cassini discoveries show evaporitic bathtub rings and 'salt’ flats around seas, which indicate that at least some materials do dissolve in the lakes. I will also discuss new Cassini RADAR evidence for compositional variations between the seas, and VIMS observations that may show the first sea-surface waves ever seen outside of Earth.

This is indeed happening now!  Click this link to join as a guest:

I thought this was now, but maybe I got the time wrong (I live in Sweden). Shame, this topic really interests me!