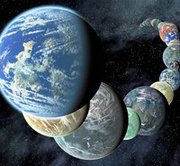 Choose Your Own Adventure: Multiplicity of Planets Among the Kepler M Dwarfs

The Kepler data set has furnished more than 130 exoplanet candidates orbiting M dwarf hosts, nearly half of which reside in multiply transiting systems. I investigate the proposition of self-similarity in this sample: whether a single stellar system architecture explains the multi-planet yield of Kepler. In fact, the data much prefer a model with two distinct modes of planet formation around M dwarfs, which occur in roughly equal measure. One mode is one very similar to the Solar System in terms of multiplicity and coplanarity, and the other is very dissimilar. I investigate astrophysical explanations for this feature of Kepler’s multiple planet population orbiting small stars, and discuss the relative unlikelihood of selection bias or unusually high false positive rates as an explanation. By folding in recent analyses about planet multiplicity versus eccentricity, I conclude with a description of how this two-mode model informs both our understanding of planet formation and our search for habitable worlds.