Learn about the personal experience of SAGANet.org Mentor, Julia DeMarines working with the Morton family in Chandler AZ!

Below is an account of my mentoring sessions with the Morton family for the duration of the Discovery Room project:

As a mentor on SAGANet.org I was paired with the Morton family for the Celio Discovery Room science projects. Peter Morton is the father of two children, Bailey (9) and Cooper (6). After the pairing we agreed on a time to meet virtually to get to know one another and to start brainstorming ideas for the upcoming science fair. We met on SAGANet.org, but Peter was having difficulties working the video tools, so we quickly switched to skype, which we continued to use for the remainder of our meetings.

Our first meeting was spent discussing what my job was like, what astrobiology is, as well as learning about the Morton family, and hearing about the Bailey’s science interests are. Bailey was very excited about Mars and about dolphins/porpoises.  We decided to brainstorm before our next meeting to think about what specifically is interesting about these two subjects as well as project ideas. The next meeting was about a week later and Bailey decided she wanted to do a project about Mars. We spent the majority of time discussing Mars, such as current and past missions, and how Mars is similar and different than Earth. Sometimes Bailey’s brother, Coop, would pop in to join in on the fun.

For our third meeting, I proposed a project idea to grow plants in Mars-like conditions. The project would account for the decreased solar flux at Mars and different lengths of daylight, as compared to Earth conditions. We would use a control plant of no light, to see what the effects of growth would be. They thought it was a cool idea, so the following two weeks we exchanged emails on how best to set up such an experiment.

Our fourth meeting, everything changed. The Morton’s decided that the experiment might be too complex and costly to set up, and they were worried about having time to sprout seedlings and having them grow enough before the project deadline. Bailey also changed her mind on topics and now decided she wanted to study porpoises. They had found an inexpensive online project, where porpoises could be tracked via satellite and then tracking data could downloaded be analyzed. Bailey wanted to know how far a Harbor Porpoise could swim in one day.  Her prediction was ~15 miles a day.

Bailey, with help from her father, recorded the distances 5 porpoise swam in 2.5 weeks. They also chose to focus on one porpoise named Kate. As they were working The week before the discovery room projects were due, they put together a poster to have me look over. I made a few suggestions, such as numerically labeling each section in the order it is meant to be read, and sent them an example of a poster I had made for a conference two years ago using the same technique. My only other suggestion was to jot down any interesting facts that they learned while researching porpoises, such as “how do they sleep?”, “what is the difference between a dolphin and a porpoise?”… etc. I explained that even as a scientist, I still find myself surprised with cool facts all the time, and it’s important to share what you think is interesting! I was thrilled to see how they incorporated what they learned throughout the process in her poster.

Overall, Bailey, Cooper and their family seemed very satisfied and proud of their accomplishments at the Discovery Room presentation. It would have been great to see them in person. Even though my background is not on porpoises, I felt being there for them as a mentor to guide them through the poster making process was definitely worthwhile. The best part of this experience was being able to meet the Morton’s at their home near Tempe, Az, as I happened to be there for a workshop for a few days, along with my Astrobiology colleague Kera Tucker. Meeting them in person was completely awesome. They were so excited to talk about their projects and their interest in science. I also was able to give them NASA education material (Astrobiology comics, stickers, educational DVD’s, posters, books and a few other informational brochures). Cooper and Bailey, as well as Peter, were thrilled!

I could tell that our visit had an impact on the Morton family. Peter mentioned how much the kids were talking about my anticipated visit, and how awesome it was (even for him, as he is a HUGE science fan) to have an astrobiologist make a house call! The experience moved me as well. I thought back to when I was their age and how it would have been an inspiration to meet a scientist at such a formidable time. As a scientist and an educator, I have now experienced first hand of what one person can do to inspire the next generation of explorers, and it gives me great motivation to continue to mentor. I will definitely remain in contact with the Morton’s, and I look forward to the next opportunity to mentor! 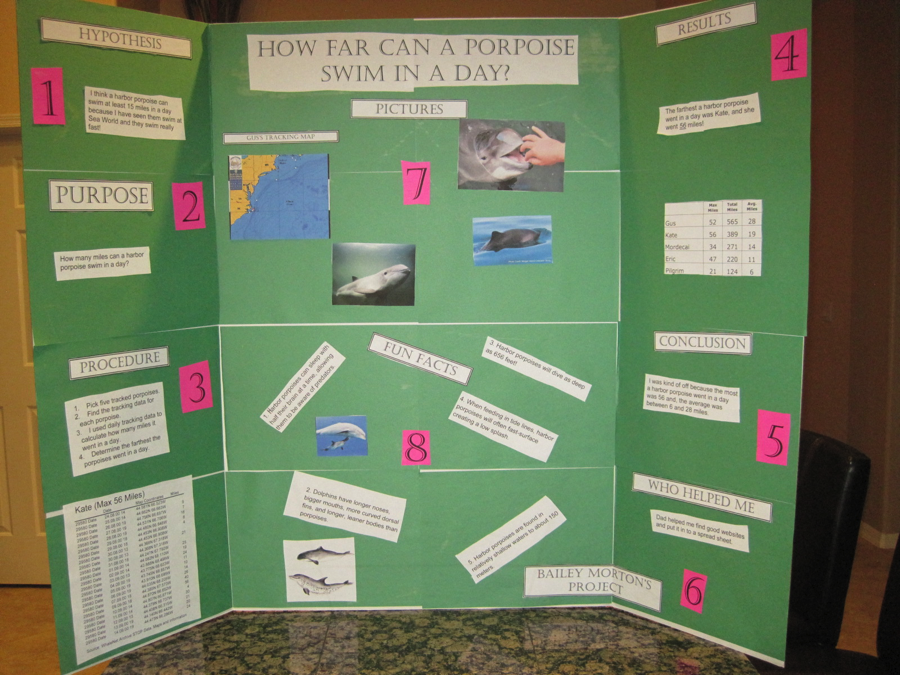 Peter, Cooper, Bailey, and myself. 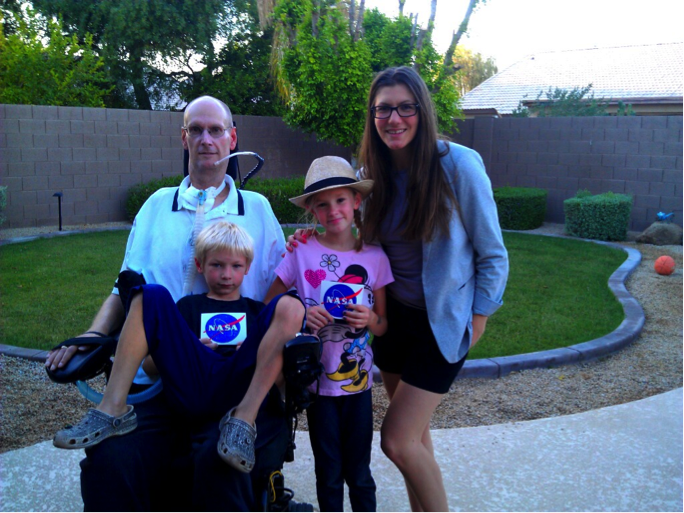 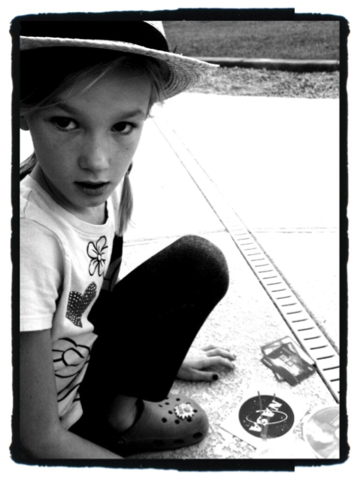 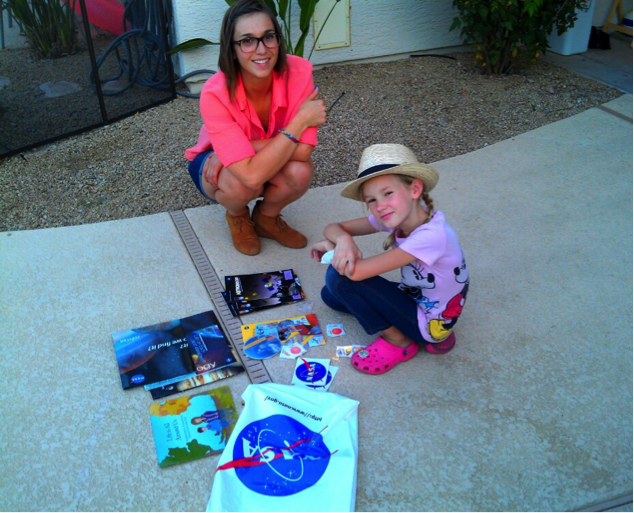 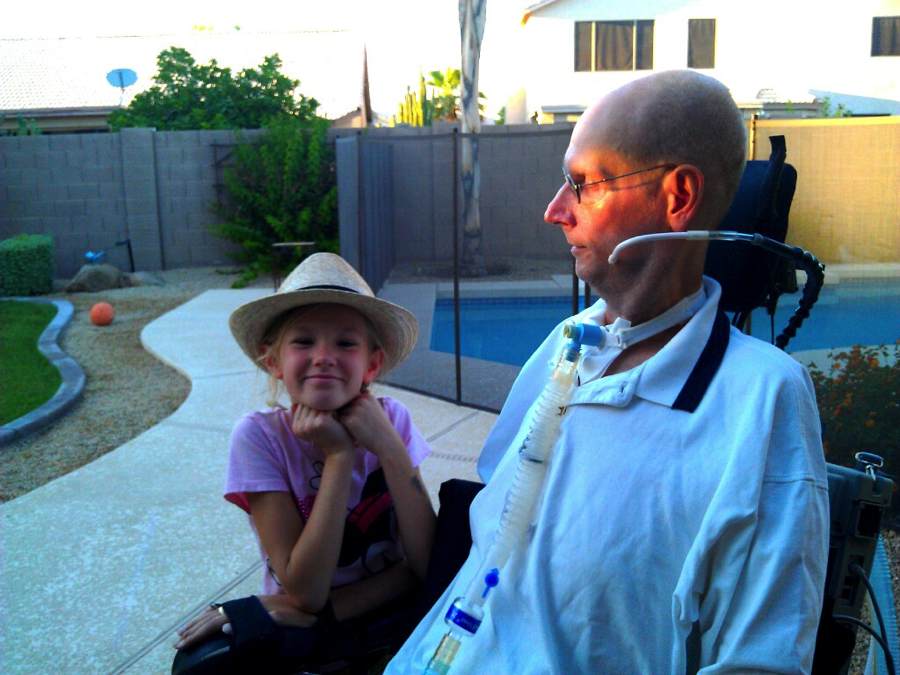 Kera demonstrating water erosion and how it relates to similar features that we see on Mars. 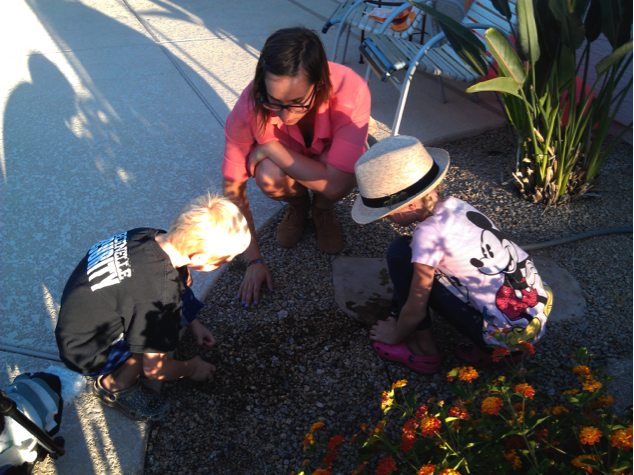