I hope you all had an excellent Earth Day on April 22nd. Did you all hug a tree, ride a bike or read the Pale Blue Dot monologue by our main man Carl Sagan? I tried to hug a tree, but my arms wouldn’t reach (clearly I’m awesome at jokes). 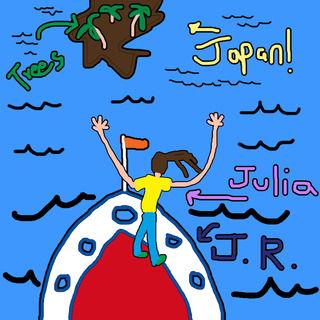 Although I’m really far away from land, being out at sea really felt like I was a part of the 'Blue' in Blue Marble. Additionally, this expedition is all about unlocking mysteries of continental crust formation, so it was a very appropriate way to spend Earth day!

While it’s awesome and important to take a day to celebrate the environment, one would think we should have more days sanctioned for this cause. It got me wondering how Earth Day came to be. Earth Day was actually proposed twice, and two celebrations were recognized about a month apart in 1970. Peace activist, John McConnell, proposed the first Earth Day. A month after its sanctioned proclamation at the UN, a second Earth Day was proposed by US senator Gaylord Nelson on April 22nd 1970. While this second Earth Day was focused on the United States, the event went international and is now recognized by 192 countries each year and is celebrated by over a billion people! International activities are now coordinated by the Earth Day Network (http://www.earthday.org/).

This year NASA decided put out the request for everyone around the globe to take a selfie, with a printable sign, to share on social media (with the hashtag #globalselfie) to help their Earth Right Now campaign. In May they will create a mosaic Blue Marble Earth image with the images submitted on social media.

As one of the education officers on this expedition, I am responsible for much of the social media for the JOIDES Resolution (twitter, instagram, facebook) and thought it would be THE COOLEST (say like Billy Madison) for the JODIES to participate. So yesterday I rounded as many folks as I could for a JOIDES selfie, and it was a success! It was a nice break in the normal routine and especially nice for everyone to come together to take a moment to celebrate Earth Day. Even though I had to coax some scientists out of their labs, afterwards everyone was glad to take a break and hang out outside for a few minutes. 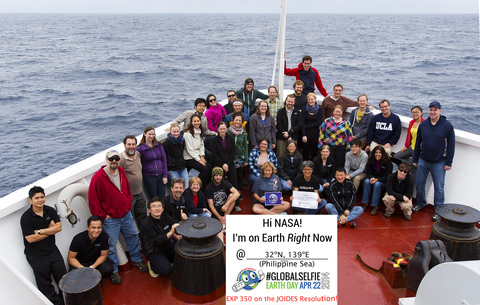 Another noble social project is the One Flag in Space effort, another initiative of the Blue Marble Space organization (as SAGANet is). You’ll notice in the picture next to the sign Cathy (front and center) is holding a picture of the Earth (dubbed Blue Marble) on a blue background. This image is the first complete picture of Earth taken from space by humans in 1972. The One Flag in Space Project uses the Blue Marble as a symbol of international unity in space exploration and international collaboration to advance our species, as one people. Not only did it add depth to our Earth Day selfie, now our location (32ºN, 139ºE) has been blue marbled!

Much like the gnome in Amelié, the Blue Marble Flag has been photographed in many culturally and scientifically significant places around the world (including in Space and at the bottom of the ocean) by people like you! For more on the One Flag in Space efforts, and to print your own Blue Marble flag and join the fun please visit http://www.oneflaginspace.org/

What did you on Earth day? Anything fun? Did you take a selfie? Hug a tree?
Feel free to comment below your Earth Day adventures or any thoughts you’d like to share!

But I am writing a book about Earth so does that count?  In my mind I'm hugging all of the trees.