We are performing Mars simulation in the Utah Desert and doing rigorous science on field during EVAs. However, sometimes your approaches are constrained in the heavy spacesuit and in absence of highly specialized equipment. That’s what I learned while conducting science operations in this simulation. A proper sample collection regime in sterilized conditions is the first and the most significant step before those samples are processed in the laboratory. One of the prime objectives of Mars 160 mission is to test the efficiency of human explorers while performing science operations on Mars. Therefore, whenever we go out on the red and stunning Mars-like bumpy land of the Utah Desert, we are fully geared up in our orange flight suits, carrying a heavy oxygenator, which approximately weighs 12 kg, a helmet attached to the tank to provide us sufficient air to breath while being locked inside the helmet that weighs another 1 kg, and boots, and gloves that add extra 1.5 kg. Additionally, if we are sampling, we are required to carry our tool bags as well as a camera which means another 1-2 kg on your body. So, overall, you are incurred with 15-17 kg while you are doing science on the field in the full-simulation suit. Although we give our best when we go out on EVAs, reach high and steep cliffs to collect samples, while carrying this weight, I realized that we are certainly constrained by this weight. While performing this Mars simulation outside, I learned that it is practically not possible to access some of those high and interior locations in space suits. Furthermore, thick and heavy gloves sometimes limit your ability to handle tools and samples efficiently.

Sampling with highly specialized tools in sterilized conditions on Mars is another concern which I understood while observing the UK Space Agency folks testing their robotic sampling instruments during the field trials here in the Utah Desert, which is called SPLIT: The Small Planetary Linear Impulse Tool. SPLIT or “specialized geological hammer” is able to chip off the rock aseptically by continuous percussion on the surface of rock even in the temperature as cold as minus 50 degrees Celsius. I found multiple unique patterns of lichen colonization on a big and highly cemented boulder of sandstone at the same location, but the position of the lichen colonization on the boulder made it difficult for me break the rock and obtain the desired sample. While discussing the lichen sampling strategy on the field, John Holt, who was the chief of field trials of the SPLIT instrument, told us that he can test SPLIT to extract a piece of rock from the location we indicate with minimal risk of contamination. 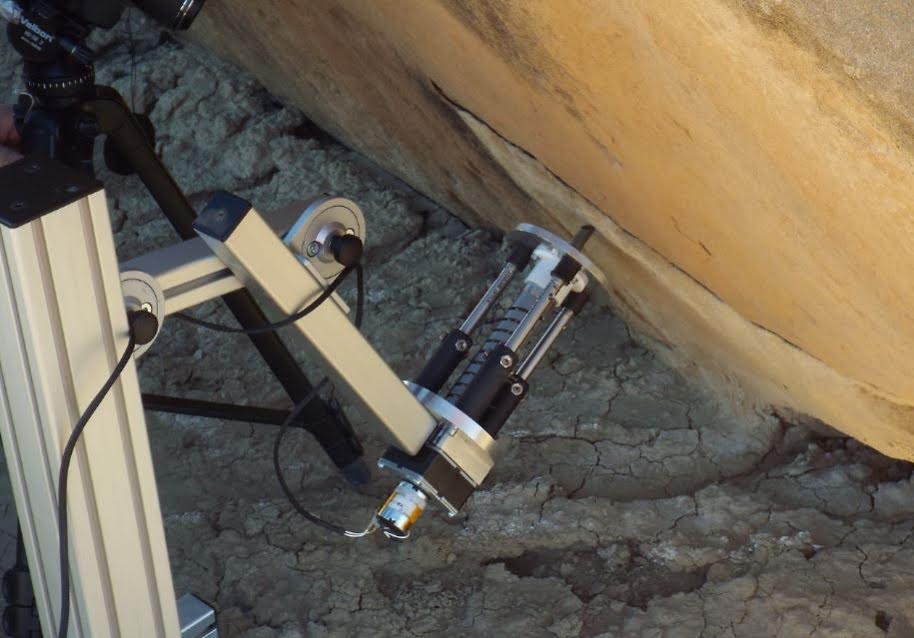 So, not only in terms of SPLIT but on the whole, I found it all amazing and a novel way of sampling in the field where the sample seems precious but geological features are intricately complicated. Another example when I felt this lack of specialized sampling tool is when our Crew Geologist Dr Jon Clarke was indicating me a very thin and shiny layer of gypsum deeply embedded in a high cliff of the Cretaceous period during one of our EVAs. I wanted to extract the pieces of gypsum from the thin layer but I could not because the equipment we had was not sufficient to obtain a nice chunk of gypsum for further processing in the laboratory. One more and a very recent example of this helplessness is during my last EVA when I was also testing a different suit with integrated oxygenator and helmet. During the EVA we had to climb ~5 meters high cliff for lichen sampling and I also wanted to explore the rare hypoliths in sandstone in the remaining time. I found this integrated spacesuit uncomfortable and inflexible from the sampling point of view because I was constantly trying to climb up and down to explore more sandstone boulders, but at a point, I got stuck, almost slipped and could not proceed, because - Safety First! - strict instructions from my crew, because sometimes I really don’t care. Once, I was badly scolded by Annalea on the field (it was actually her concern for me, but the incident was a bit hilarious) my helmet got completely fogged up but I was not willing to wait for it to be cleared up and wanted to proceed. She shouted – “Anu sit down” and I had to! When we came back to the hab, we laughed thinking about that 'episode'! Anyways, when I couldn’t go ahead in that integrated spacesuit, I felt this urge to have sampling tools/instruments complementary to our spacesuits to obtain the desired sample. Actually, that’s when I felt that I must write about it.

I also asked Dr Jon Clarke about his views on these limitations and he said “They are of two types. Limitations of available equipment and limitations imposed by the suit. The first, while sometimes frustrating in the short term, is something that can be remedied on future crews and expeditions. The second class is the more significant, because it points to the need for specialized equipment and procedures, perhaps as yet undeveloped, to overcome them. The specialized equipment might come with its own limitations, such as power and weight, which place additional constraints on operations. For example, a rock saw might enable lichens in the middle of large boulders or outcrops to be sampled but would be heavy and require fuel and water. It could only be used near a support vehicle.”

Despite these complications, we are accomplishing our science goals on-field in full simulation suit. Personally, I feel that human exploration of Mars is far more challenging, as well as efficient in terms of science operations because we possess the 'will of explorer' and desire to surrender ourselves to achieve higher goals. If equipped with specialized tools and techniques, I think the human astrobiological exploration of Mars can be highly focused and productive.

Above all, I learned that preparation for the astrobiological exploration of Mars is not just limited to having a solid research objective in mind, or a protocol on the paper and applying those protocols in an analog environment; but, it also demands immense human mental and physical mettle to reach almost inaccessible nooks and corners and sometimes putting your life at risk for the sake of science and for the sake of having a flavour of what it actually takes to explore Mars. And in that sense, I think I have discovered myself as an explorer.