Yesterday morning, Jon, Annalea, Anastasiya and I headed for another adventurous EVA. This EVA was supposed to be in semi-simulation because the sampling site was 75 km away from our habitat and generally accessible to the public. We started gearing up at 10 am. The EVA team entered into the airlock at 10:30 am and started depressurization. Since we were supposed to travel ~75 km, we took PEV (Pressurised Exploration Vehicle) to get to the location. This EVA was supposed to be conducted at an immensely beautiful canyon. We went on EVA with two research objectives in mind: to grab the sample of gypsum deposited during Early Jurassic and to draw gypsum beds to provide a context for the sampling site.

Gypsum astrobiology is one of the prominent research goals of Mars 160 mission. According to our Crew Geologist Dr Jon Clarke, this site consists of two different formations in the Early Jurassic (200-175 Mya): the upper Carmel, lower Carmel, and Navajo Sandstone formations. The Carmel and Navajo Formations belong to the San Rafael and Glen Canyon Groups, respectively.

The upper Carmel Formation is dominated by pinkish to white gypsum which occurs on metre-scale interbeds with green shales. The gypsum shows a range of textures, including lamination and chicken wire textures. The chicken wire texture suggests that some of the gypsum deposits may originally have been anhydrite. The gypsum has been deformed, possibly during the formation of the San Rafael Swell. Small kinds of folds are locally present and the alternation of shale and gypsum has been disrupted by strata-bound brecciation.

On the other hand, the lower Carmel Formation consists of interbedded fine sandstone and red mudstone. The lower part of the sandstone succession shows through cross-bedding. The upper part shows wave ripples, sometimes with worm trails in the troughs. The transition from the lower to the upper part of the Carmel Formation appears gradational, with a transition from fluvial (cross-bedded sandstone) to shallow marine (worm trails in rippled sandstone) to the evaporitic lagoon (bedded gypsum and shale). 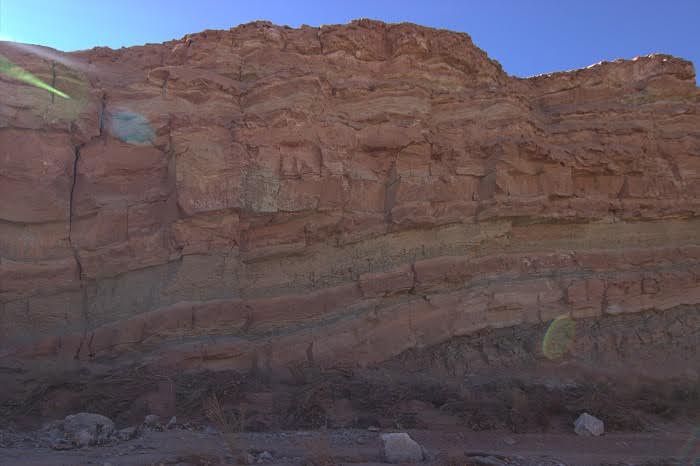 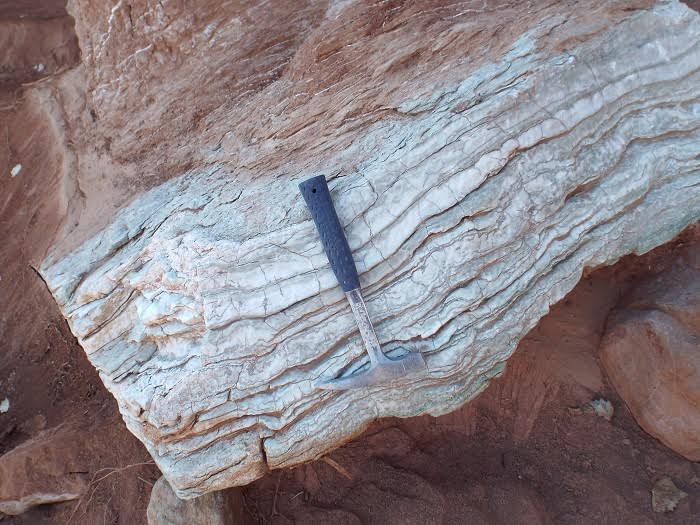 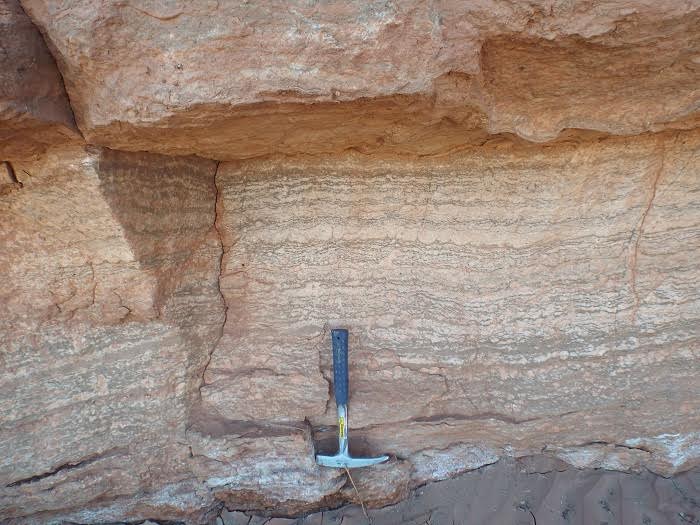 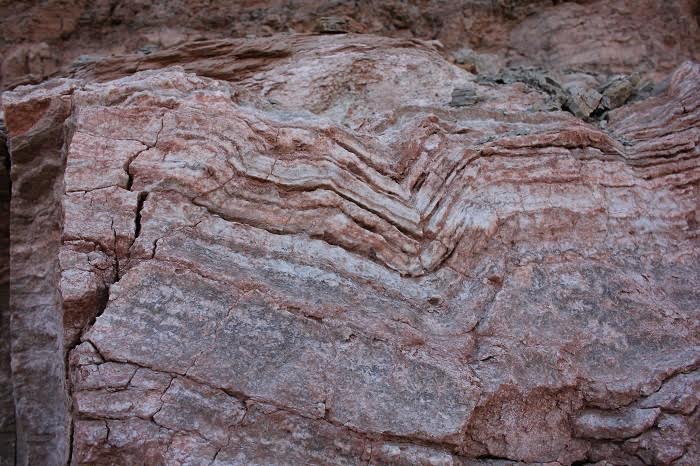 The Navajo Sandstone Formation comprises the main ridge of the San Rafael Swell. This canyon is incised into it. During yesterday’s EVA, our access to this formation was blocked by the flood and frozen sections of the slot canyons. The Formation is characterized by fine to medium sandstone with very large scale cross-bedding. This cross bedding is generally recognized as indicating deposition by wind-blown sand dunes.

Hence, Jon and I were focused on sampling gypsum from each geological variation. Anastasiya assisted us in sample collection and storage. So far, we have collected gypsum from three historical sites, however, the samples collected during yesterday’s EVA are my most favorite. I always prefer to chip off large and thick chunks of evaporite in order to obtain crystals from the very core to avoid contamination; this is to be done in a specialized laboratory under sterile conditions. On the other hand, Annalea started drawing those laminated gypsum beds. I think field drawing of the sampling site is more efficient compared to pictures as the artist tries to carve every little detail in a more dynamic way. Annalea also drew the panorama view of the Kissing Camel Ridge. She also drew the wave ripples on the sandstone and fossilized sinuous worm trails in the troughs of wave ripples. Jon and Annalea’s contribution is going to be very important in interpreting the geological context of the sampling site when Dr Kathy Bywaters (Earth-based team located at NASA Ames) and I would process the sample.

Having finished our field work, we moved forward to see the origin of the canyon cut through the Navajo sandstone. We were actually wonderstruck. The canyon was speaking the language of silence, perhaps telling us the ancient story of catastrophe. I realized that there is an inherent beauty in catastrophe. 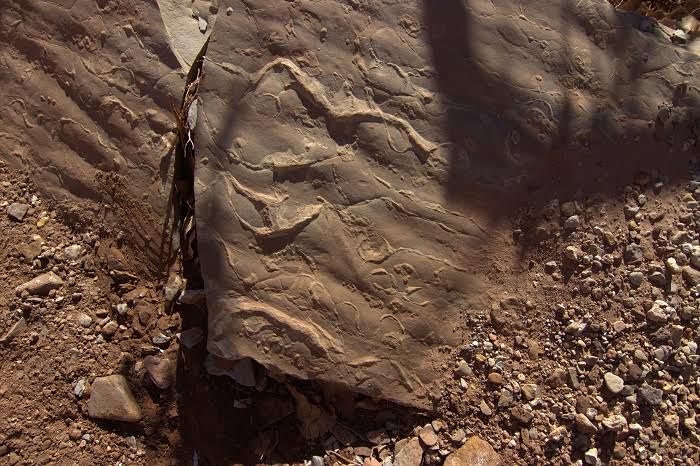 Underside of the loose block of fine-grained sandstone from the lower part of the Carmel Formation showing sinuous worm trails in the troughs of wave ripples. (Image Credit: Dr Jon Clarke and The Mars Society) The origin of the beautiful canyon. (Image Credit: Dr Jon Clarke and The Mars Society)