It was Sol 86. Actually, for Crew 172, it was Sol 6, but I would call it Sol 86 because for me this mission is an important continuation of Mars160 science operations.

So, we all woke up at 7 am and got ready for the breakfast by 7:30 am. This was going to be a busy Sol for me because at 8:30 am, I was supposed to meet with an Earth-based Microbiologist Dr Rebecca Merica, and in the afternoon I was to be part of an Engineering EVA. So, after about 2 hours of meeting with Dr Merica, I performed my cleaning duties both in the Science Dome (which my crewmates call “Anushree’s Lab”. And I love it :) and the lower deck.  We had rehydrated spinach pasta with quinoa in lunch at about 12 pm. After one and a half hour, we started Space Nap wearing a mask as part of Photic Sleep Enhancement study in simulated Mars mission. Space Nap usually lasts half an hour. We woke up at 2 pm and started gearing up for the EVA.

The EVA team consisted of our Crew Engineer Troy Cole, Patrick Gray who is our Green Hab Officer, and I. This EVA was basically focused on the routine engineering check. We usually consider the engineering EVAs – short and sweet, but after this EVA, our Crew Engineer Troy (a person who talks to himself and we call him Mr Helpful because he can fix almost everything :) decided to stop calling it so  The reason is interesting, believe me!

As soon as we got ready in our spacesuits, we did the radio check and commenced depressurization inside the EVA airlock. After three minutes, we egressed the habitat, being oblivious to the fact that the 15 minutes EVA is going to be a two-hours procedure. We opened the front hatch and exposed to a beautiful milky white landscape, entirely covered with a sheet of snow.  The temperature outside was as low as minus 5 degrees C.  So, we started with diesel and propane level check and notified the HabCom Nicholas McKay, who is our Crew Journalist.  After finishing the fuel check, we proceeded to the water tanks. We were supposed to check the present level of water in the static tank. The static tank is the source from which the water is pumped into the loft tank inside the habitat for our daily usage.

First, we were not able to see the level of water inside the static tank because our helmets were fogged up due to the extremely cold temperature outside (sometimes we get icicles formed inside our helmets). But anyways, we had to perform our duties as EVA team as best we could. Somehow, we managed to see the level of water and notified the HabCom.  The water in the static tank was supposed to be transferred to the loft tank. However, we found the pipe attached to the pump, as well as the pipe that goes inside the hab, was completely frozen and blocked. Now, the adventure began!

During all that, we were constantly in conversation with our HabCom through radio transmission.  We decided to break the ice inside out the pipe somehow. We requested HabCom to provide us few tools and equipment, such as hammer and screwdriver. One by one, we three tried our hands with these tools. We were succeeding. However, the ice inside the pipe was still as hard as a rock. We thought only hammering and scraping will not work and we need some hot water to melt the ice. We had to be cautious to not to damage the pipe in this process as well. So, we requested a bucket of hot water.  Usually, engineering airlock (rear hatch) is used for these operations.  Once we received the hot water we started pouring it inside out the pipe many rounds. It took us 20-25 minutes. But, to our delight, it worked! Little chunks of ice remained in the pipe, but we decided to attach the pipe back and tell the HabCom to turn on the pump to see if it works. We did the same.  But as soon as the pump was on, pipe got detached and thrown away by the heavy flow. It was not screwed properly (our helmets were fogged up and barely could we see anything). So, we lost almost a bucket of water, which means a lot on Mars. We all shouted altogether in the radio – Stop, Stop! (we were telling our HabCom to stop the pump). We repeated the procedure, but this time, with a great care. In the meantime, I noticed that one of the pipes attached to Patrick’s oxygenator got dysfunctional. So, again our Crew Engineer Troy - Mr Helpful - stepped in and fixed his suit on spot!

The pump was about to switch on, and we crossed our fingers. This time, it worked! Buuut… we found a leakage in the pipe. Complications seemed to be unending. We had to stop the pump again and requested duct tape and scissor. We secured the pipe with the duct tape and turned on the pump.

Finally, our “operation water” was successful!

I would say this EVA was the best example of a great team work. I had been part of many such EVAs when I put myself into precarious situations and challenged my physical and mental strength; having said that, this EVA gave me a new perspective of living on Mars. I learned that on Mars, you are not just a scientist, an engineer, a doctor, or a journalist. On Mars, you have to be everything. It’s not only about performing herculean tasks or conducting field science, but also, using the presence of mind to solve household puzzles. It is also about taking care of your home and ensuring a smooth life for the people living inside that home.

On Mars, you may not have similar issues but your attitude towards those issues would have to be the same. I think that’s the essence of being part of a simulation.

When we entered back into the front hatch for re-pressurization, our Crew Engineer Troy (Mr Helpful) screamed with joy – “Oh I got a new job! Now, I’m a plumber as well!” :) 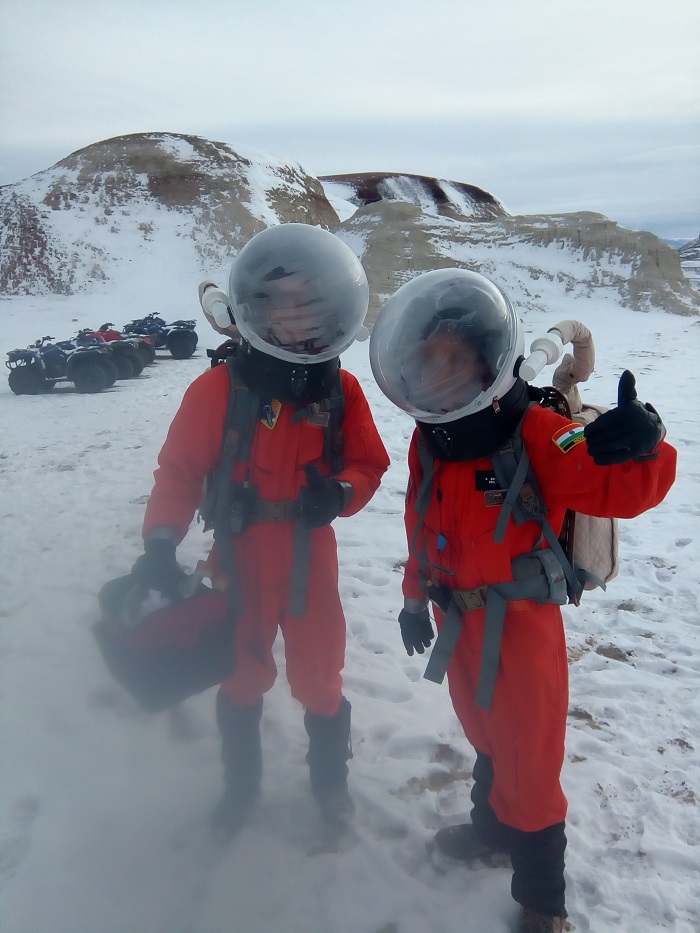 Patrick and I after finishing the engineering task. (Image credit: The Mars Society)