Thursday yielded another fun set of adventures in Yellowstone! Kirsten and I joined up with Arizona State University students to go sample a remote site, Obsidian Pool, near Mud Volcano (a popular spot for Yellowstone visitors).  Park policy is such that scientists cannot sample from the visitor boardwalk, or anywhere visible from the boardwalk. After all, approaching a hydrothermal spring for sampling is not to be taken lightly. Often, springs are undercut and so approaching them must be done with extreme care.  Our path took us up the boardwalk, from which we would cut out into the forest for a 30 minute hike to Obsidian. However, a bison was obstructing the boardwalk! Bison, in addition to being gorgeous animals, can be very dangerous, particularly lone males like this one. We could not pass. We thus took a detour and entered the forest early. 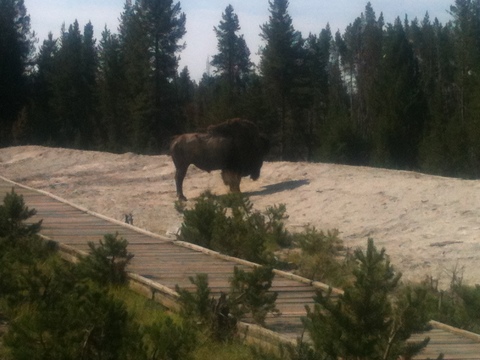 A Lone Bison bull near the boardwalk at Mud Volcano, Yellowstone National Park. Can't get closer! A boiling mud pot at the Obsidian Pool area. The Grizzly appeared right to the right of the
hill on the top left of the photo

We exited the forest by a clearing, and looked for bears. This is grizzly territory. The rule is simple, we see a bear; we leave. No sample is worth the risk.  We finally reached the Obsidian Pool area. As the ASU researchers prepared their equipment, Kirsten and I took a radio over the small hill to scout out the sampling area.

Then came the call: “Hey you guys over the hill, please regroup, we have a grizzly”. Yikes! Thankfully, we were not far and hurried back, bear spray in hand. We regrouped and 600 feet away, right where we had exited the forest not 15 minutes earlier, was the grizzly. Were we tracked? A decent sized pond separated us from it, but it was still an unnerving sight. We couldn’t go back the way we came! Luckily, there was a cut in the forest for telephone poles, so we decided to head that way toward the road, clapping, hooting, singing and generally making as many scary noises as possible.

As we followed the narrow stretch of forest, we suddenly heard a large “craaaack” coming from the trees. Safety in numbers! We grouped together closely, again clutching our bear spray. Suffering from bear-anoia, we feared that what was probably (hopefully!) just a branch snapping was actually our bear stalking us. We spotted the road and loudly exited the forest. No samples, but wow! A grizzly!