Wednesday brought new experiences with hot springs. Eric took us to Sentinel Meadows, an area of the Lower Geyser Basin with several spectacular springs, including Flat Cone, Steep Cone, Mound Cone, and Queen’s Laundry springs. Steep cone is an approximately 15 feet tall cone formed by sinter deposited over thousands of years. Sinter is silica that precipitates out from the water as water is being ejected from the spring. I remembered to be quite careful to ensure that no spring water splashed on my glasses, as the resulting silica deposit would have been very difficult to remove without scratching them! At the top of the cone lies the spring, with a silica “crust” very similar in appearance to a pie crust, but instead of a yummy fruit filling, the spring’s continuously boiling snapped our imagination of pies and ice cones. After we sampled for gas, we moved on to Mound Cone. Mound Cone has a mild eruptive cycle! As the spring enters its eruptive cycle, the water level starts rising and floods the cone. The water level in the spring then drops down out of view, and the cone starts “thumping”, like a heartbeat, revealing how hollow the volume under the cone is! We didn’t know if the spring would suddenly start geysering, but Eric, enjoying our "newbie" reactions, was having a good time watching our facial expressions, as he knew the spring would not geyser but only mildly overflow.

The physics of what happened, if I understand it correctly, is quite interesting! The water rose because of the pressure at depth of water turning into steam due to the extreme heat. The pressure pushed the water column out of the pool (the overflow), which decreased the pressure, and most of the water column must have turned to vapor, which is why the water level dropped. The “thumping” we heard was certainly that phase change, as the steam must have been redirected in underground piping.

We next went to Queen’s Laundry spring, which was across a marsh and a river from Mound Cone. I got my hiking boots mighty dirty, and had to take them off the cross the river, which had a very pleasant temperature! Queen’s Laundry contains the oldest construction of Yellowstone! The ruins of a wooden “bathhouse”, built by the Hayden expedition in the 1870’s, still exist in the outwash of Queen’s Laundry. Queen’s laundry is a beautiful pool, with a deep blue color occasionally bubbling. 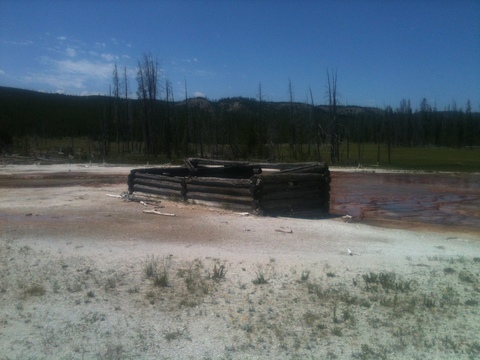 We then proceeded to our last stop of the day: Boulder spring. Boulder spring, tucked away behind a hill, was a few miles away, and the sun and the bugs were getting to me. Thankfully, I had plenty of water! Boulder spring is another of those intimidating pools. It is continuously geysering with water approaching boiling. The setting, typical for Yellowstone, was simply spectacular.

This summer, Art of Inquiry hosts free space exploration and astrobiology webinars for middle-school students and their families all over the world.

Here is a list of what was covered so far, as well as an updated schedule of webinars:

The search for life in the Universe, Dr. Alex Tsapin, JPL (retired)
The history of SETI, SETIQuest editor, Larry…