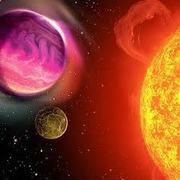 Eliza Kempton
Eliza Kempton is an assistant professor of physics at Grinnell College. She graduated from Middlebury College in 2003 with a B.A. in physics, and in 2009 she received her Ph.D. from Harvard University in astronomy. Eliza's research focuses on small extrasolar planets known as super-Earths. These planets are 1 to 10 times more massive than the Earth, and they are currently offering astronomers the first glimpse into "exo"-worlds that may be similar to our own. Eliza models the atmospheres of extrasolar super-Earths to study their unique properties -- Understanding the atmospheres of extrasolar super-Earths is an important early step on the road toward finding other habitable Earth-like planets.

Shawn Domagal-Goldman
Shawn Domagal-Goldman is currently a Research Space Scientist at NASA's Goddard Space Flight Center in Greenbelt, MD. He received his Ph.D. In Geosciences and Astrobiology at The Pennsylvania State University, after getting a M.S. in geology and a B.S. in Physics at the University of Rochester. His research is on exoplanet characterization, lessons from the "pale orange dot" that was the Archean Earth. You can also find him blogging about baseball stats and the woe of being a Cubs fan at Bleed Cubbie Blue.

RSVP for "Exoplanets, a Play in Four Parts" - Virtual Seminar to add comments!