"Mentor of the Month" with Graham Lau! 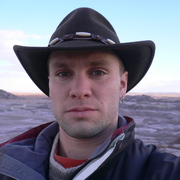 Join us for a LIVE one-hour event with SAGANet Scientist-Mentor and PhD student Graham Lau on SAGANLive!

About Graham: Graham Lau earned undergraduate degrees in biology and chemistry from York College of Pennsylvania in 2007. He studied astrophysics and geology at the University of Colorado Boulder before entering a graduate program centered on astrobiology. His doctoral research, funded by the National Science Foundation and NASA, focuses on microbial sulfur cycling in glacial environments. Graham is an accomplished orator, having won competitions in public speaking through Toastmasters International and NASA Famelab. Graham can be followed through his blog, A Cosmobiologist’s Dream (cosmobiologist.blogspot.com), where he writes about math, science, culture, and the future.

Talk Title: So there I was: Telling stories about our science

Talk Abstract: From standing on the top of a glacier in the Arctic and feeling rather chilly to standing on a stage in front of a large audience and feeling rather nervous, my journey as an early-career scientist has taken me from research in the field and the lab to finding my voice as a communicator of science. I intend to share with you my current work as a graduate student. This includes my current research on microbial sulfur cycling in a High Arctic glacial system as well as my endeavors in public outreach and education.

About the "Mentor of the Month" series on SAGANet: SAGANet is more than just a social network, but also a hub for scientists to engage with the public through our e-mentoring programs. Each month, we feature one of our international cohort of scientist-mentors with a special one-hour event highlighting their scientific and/or public engagement activities.

RSVP for "Mentor of the Month" with Graham Lau! to add comments!